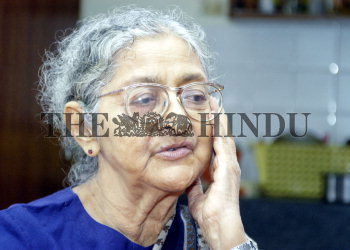 Caption : C.B. Muthamma, women IFS, during an interview, in Bangalore. In 1949 she became the first woman in India to clear the Civil Services Examination and joined the Indian Foreign Service. She has recorded much of her observations and experiences in her book, a collection of essays on India called "Slain by the System: India's Real Crisis". Photo: K. Gopinathan 16-07-2004