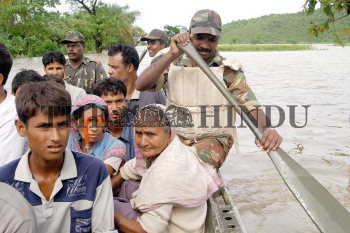 Caption : Army jawans evacuating people from the flood affected Changchari village in Kamrup district of Assam, just 35 km away from Guwahati on July 12, 2004. Flood scene remains grim for the fifth day and inundation of the National Highways and arterial roads snapped road communication between Assam and rest of India. Assam Government has also appealed to the Indian Air Force to make available helicopters for flood relief operation. Fifteen people have died and more than 20 lakh people have been affected in 2774 villages in Assam. Photo: Ritu Raj Konwar