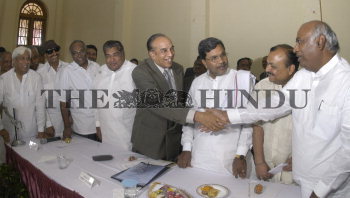 A ALL PARTY TEAM SEEKING A HIGH COURT IN NORTH KA

Caption : The Chief Justice of the Karnataka High Court, N.K. Jain (fourth from right), with an all-party delegation led by the Karnataka Chief Minister, N. Dharam Singh (fifth from right), in Bangalore on July 10, 2004. The all-party delegation met the Chief Justice to urge him to establish a Bench of the High Court in the North Karnataka region. Photo: K. Gopinathan