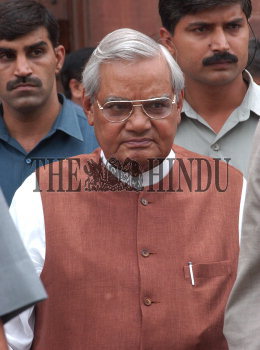 Caption : The former Prime Minister, Atal Bihari Vajpayee, coming out of the Parliament House after the presentation of the Union Budget for the year 2004-05 by the Union Finance Minister, P. Chidambaram, in New Delhi on July 8, 2004. Photo: Rajeev Bhatt