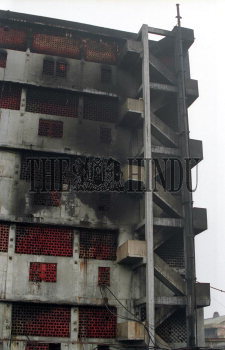 Caption : The five-storey Endosulfan unit of Hindustan Insecticides Limited (HIL) at Udyogamandal near Kochi which was gutted in a major fire in the early hours of July 6, 2004. According to plant sources, twenty workers who were inside the plant in the 'graveyard shift' heard an explosion around 2.45 a.m. The workers rushed out following a second explosion and fire on the second floor of the building. No casualities were reported. Photo: H. Vibhu