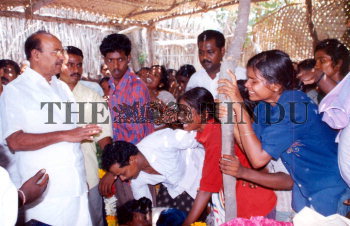 Caption : The PMK founder, S. Ramadoss, consoling the families ROAD accident victims near Tindivanam on June 7, 2004. Twelve persons, seven men, two women and three girls, died in a collision between two tipper-lorries on Molasur Cross ROAD near Tindivanam on the night of June 6, 2004. The victims were among the 78 persons who were injured earlier when a private bus, plying on the Uppu Vellore-Tindivanam route, crashed into iron railings and fell overturned into the Perumukkal tank. The locals requisitioned the tipper lorry to carry the injured to hospital. However, it also met with an accident, in which its rear portion got disengaged and overturned. The cabin dashed against a ROADside tree before coming to a halt. Four persons were killed on the spot and eight others died on way to or soon after admission to hospital. Photo: T. Singaravelou