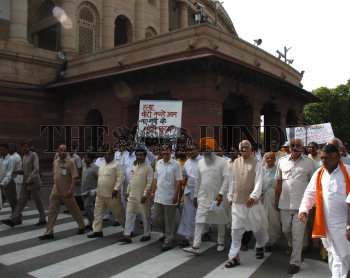 Caption : The former Deputy Prime Minister, L.K. Advani, and former Finance Minister, Jaswant Singh, along with other NDA members of parliament (MP), march towards Rashtrapati Bhavan from Parliament House, in New Delhi on June 03, 2004, to hand over a memorandum demanding that Ministers of the United Progressive Alliance (UPA) Government with a criminal background be revomed. Photo: Shanker Chakravarty