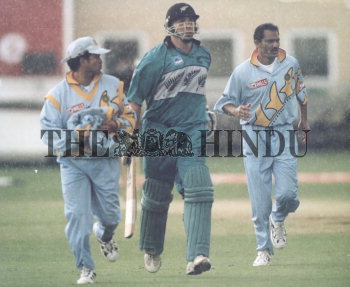 Caption : Sachin Tendulkar, Roger Twose and Mohammed Azharuddin run for cover during a rain interruption in the Super Six match between India and New Zealand at Nottingham on June 12, 1999 in the Cricket World Cup 1999 held in England. Photo: V.V. Krishnan