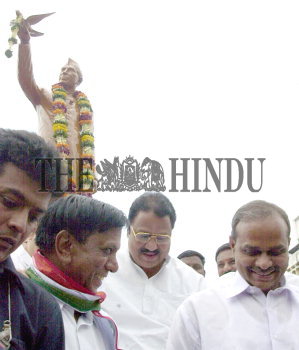 Caption : The Andhra Pradesh Chief Minister Y.S. Rajasekhara Reddy, after paying homage to the first Prime Minister of the country, Pandit Jawaharlal Nehru, on his death anniversary, in Hyderabad, on May 27, 2004. Also seen is the PCC president and Minister, D. Srinivas. Photo: H. Satish