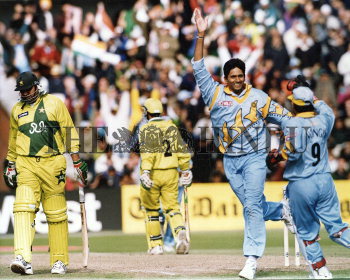 Caption : Indian pace bowler Venkatesh Prasad celebrates with Nayan Mongia after taking the wicket of Moin Khan in the Super Six match between India and Pakistan at Manchester on June 8, 1999 during the Cricket World Cup 1999 held in England. Photo: V.V. Krishnan