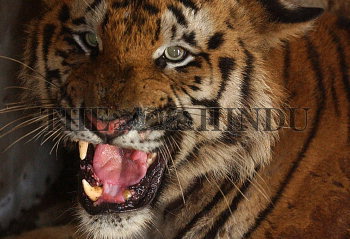 Caption : This old toothless tiger that had created havoc in Shamshernagar village of Sunderbans in South 24 Parganas district of West Bengal, has been captured and brought to the Kolkata zoo, on May 25, 2004. Though captured twice in the last two months after it had killed cattle and one villager, it had been to its natural habitat. But this time the Wildlife Department did not take any chances and instead brought the tiger to the zoo. Photo: Parth Sanyal, 24-05-2004