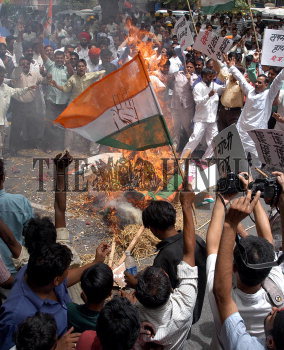 Caption : The supporters of the Congress (I) president Sonia Gandhi burning effigies of the BJP leaders, against their move to raise the foreign origin issue of Sonia Gandhi, during a demonstration by the DPCC at Jantar Mantar in New Delhi, on May 19, 2004. Photo: S. Subramanium