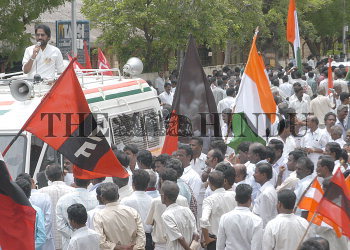 Caption : Members and activists of the Democratic Progressive Alliance, led by the DMK students' wing president Siva, stage a protest demonstration in front of the Tiruchi collectorate office, against the mass deletion of names in the electoral rolls in the recently concluded Lok Sabha elections, on May 17, 2004. Photo: M. Moorthy