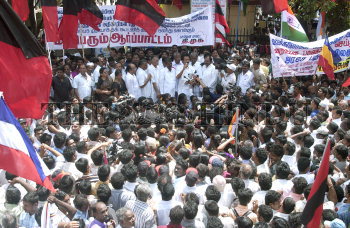 Caption : Members and activists led by M.K. Stalin, R. Nallakannu and G.K. Mani of the Democratic Progressive Alliance, stage a protest demonstration before the collectorate office in Chennai, on May 17, 2004, against the mass deletion of names in the electoral rolls in the recently concluded Lok Sabha elections. Photo: R. Ragu