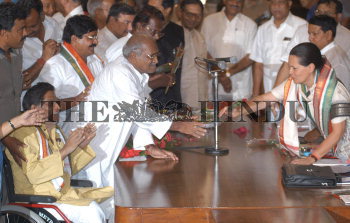 Caption : Congress President Sonia Gandhi being greeted by Ajit Jogi and other MPs after she was re-elected as party President after a meeting at the Parliament House in New Delhi, on May 15, 2004. Photo: V. Sudershan