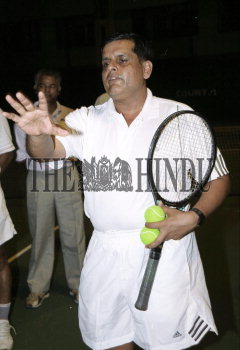 Caption : 'Our girls are doing better than our boys', said the former Davis Cupper and Indian tennis captain Ramesh Krishnan, after inaugurating the four synthetic courts at the Regional Sports Centre's Justice P. Govindan Nair indoor tennis complex. He also conducted a brief clinic for players after the new courts' opening ceremony in Kochi, on May 14, 2004. Photo: Vipin Chandran