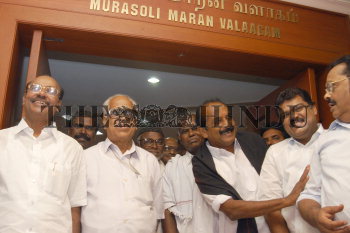 Caption : (From left): The PMK founder-leader S. Ramadoss, the CPI (M) State secretary N. Varadarajan, the CPI State secretary R. Nallakannu, the MDMK general secretary Vaiko, the TNCC president G.K. Vasan and the DMK principal secretary Durai Murugan, at the Anna Arivalayam in Chennai on May 12, 2004 after attending a meeting of the leaders of the parties in the Democratic Progressive Alliance (DPA). The meeting was held to discuss the mass exclusion of names from the electoral rolls during the Lok Sabha elections. Photo: V. Ganesan