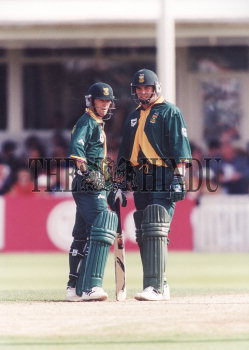 Caption : South African batsmen Jonty Rhodes and Jacques Kallis in a mid-wicket conference during the semifinal match between Australia and South Africa at Birmingham on June 17, 1999 during the Cricket World Cup 1999 held in England. Photo: N. Sridharan