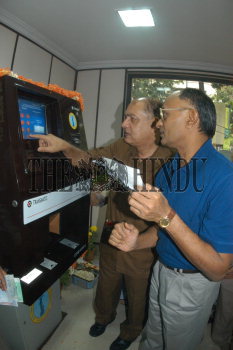 Caption : The Bangalore Water Supply and Sewerage Board chairman, M.N. Vidyashankar,(right) helping the Chief Secretary of the Karnataka Government, K.K. Misra, to scan a bill at the inauguration of the cheque/cash depository machine, Model CDM 4000L, at MALLESHWARAM in Bangalore, on May 06, 2004. Photo: K. Gopinathan