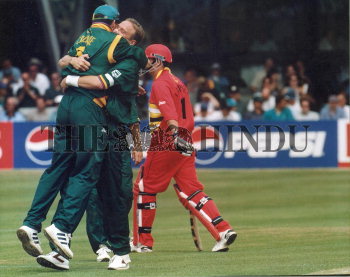 Caption : South African bowler Allan Donald being congratulated by his teammates after the dismissal of Stuart Carlisle of Zimbabwe in a World Cup cricket match between South Africa and Zimbabwe at Chelmsford, England on May 29, 1999. Photo: N. Sridharan