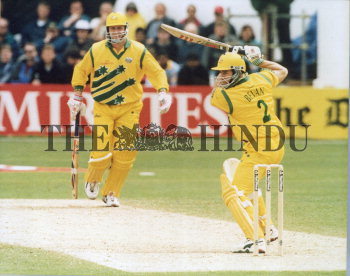 Caption : Australian batsman Michael Bevan plays a shot as the non-striker Tom Moody looks on during the Super Six match between Australia and India at The Oval on June 4, 1999 in the Cricket World Cup 1999 held in England. Photo: V.V. Krishnan