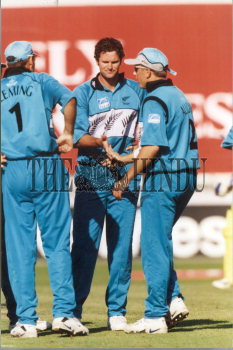 Caption : New Zealand bowler Chris Cairns celebrates with teammates the dismissal of Wajahatullah Wasti in the semifinal match between New Zealand and Pakistan at Manchester on June 16, 1999 during the Cricket World Cup 1999 held in England. Photo: N. Sridharan