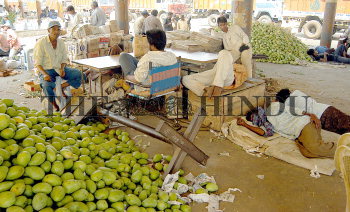 Caption : Labourers taking a nap on a hot day at the Gaddiannram fruit market in Hyderabad, on April 29, 2004. The market is dull with a significant fall in the inflow of mangoes this season. The wholesale market which had received around 1000 lorries of mangoes in March last year, did not receive even a single lorry load of mangoes during March this year. During the current month, the market has received only 2893 lorries compared to 6178 lorries last year. The severe shortage in supplies has caused a steep rise in the prices, from Rs 14,000 per tonne last year to around Rs 16,000 this year. Market officials do not foresee any inprovement in the situation because there is already a huge loss of crop this year. Photo: A. Roy Chowdhury