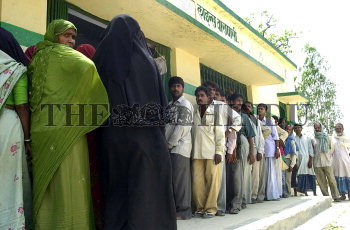 Caption : The voters are waiting for their turn in queue, to cast their votes during the re-poll, at Mahmadpur polling station, in Varanasi, on April 28, 2004. Faults in EVMs have forced re-poll in two polling stations in Varanasi. Photo: Akhilesh Kumar