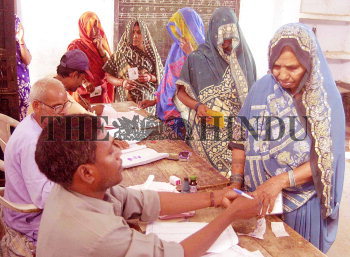 Caption : An elderly woman being marked with indelible ink on her finger by a polling official, before casting her vote during the re-poll at the Tendui polling station in Varanasi, on April 28, 2004. Faults in EVMs have forced re-polls in two polling stations. Photo: Akhilesh Kumar