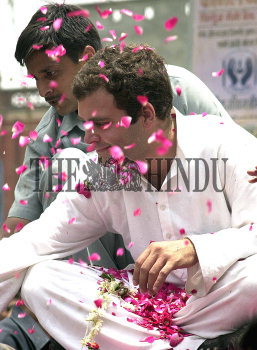 Caption : Congress (I) leader Rahul Gandhi, being showered with rose petals by the party activists during his election campaign in support of the party candidate in Varanasi, in eastern Uttar Pradesh on April 23, 2004. Photo: Akhilesh Kumar