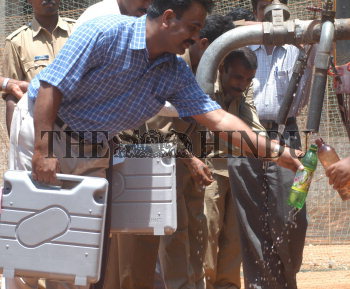 Caption : A government employee carrying the Electronic Voting Machines,(EVM) fills his water bottle before leaving for a polling booth at MALLESHWARAM in Bangalore, on April 19, 2004. The first phase of election in Karnataka will be held on April 20, 2004. Over 200 lakh voters will be casting their votes in 15 Lok Sabha and 120 Assembly constituencies. Photo: G.R.N. Somashekar