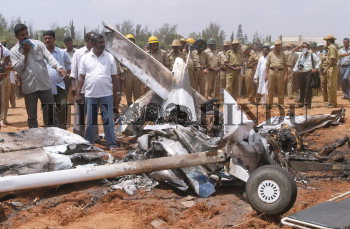 Caption : The remains of the Cessna 180 single engine aircraft which crashed at Jakkur airfield near Bangalore, on April 17, 2004. All the four persons on board, including the pilot and actress Soundarya, were killed in the Accident. The actress, who had joined the BJP recently, was on her way to Karim Nagar in AP for campaigning for the party. The 13 year old Cessna belonged to Agni Aviation Adventure Pvt Ltd. Photo: G.R.N. Somashekar