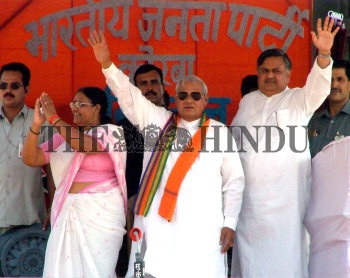 Caption : The Prime Minister Atal Behari Vajpayee, along with his neice and BJP candidate from Janjgir constituency, Karuna SHUKLA, and Chattisgarh Chief Minister, Dr. Raman Singh, waving hands to the crowd during an election meeting at Korba in Chattisgarh, on April 16, 2004 Photo: A.M. Faruqui