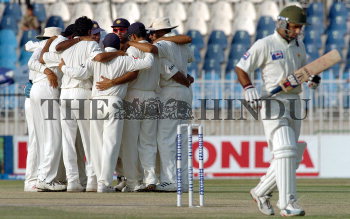 Caption : Pakistan's Taufeeq Umar walks back, after being dismissed by Irfan Pathan as the Indian Team members huddle, on day three of the third Test between India and Pakistan at the Pindi cricket stadium in Rawalpindi, on April 15, 2004. Photo: S. Subramanium