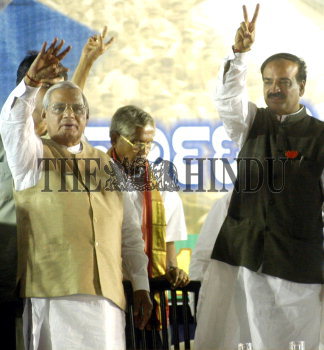 Caption : The Prime Minister, Atal Bihari Vajpayee and the State president of the Bharatiya Janata Party, H.N. Ananth Kumar, wave to the crowd at a public meeting in Bangalore, on April 13, 2004. Also seen is Ramachandra Gowda, the party candidate of the Kanakapura Lok Sabha constituency. Photo: V. Sreenivasa Murthy