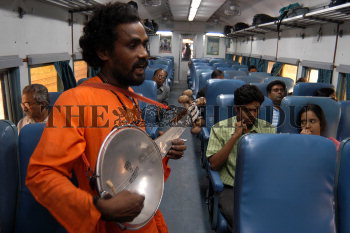 Caption : Travelling up and down by train to Santiniketan in West Bengal is always a musical delight. Even though the loss of Rabindranath Tagore's Nobel Prize medals has dampened the feelings of so many performing artistes, there are many singers and musicians aboard the trains plying between Burdwan and Santiniketan, who sing the Rabindra sangeet of Tagore and other folk songs with great fervour. These train artistes feel that they have to carry on the great poet's works and also earn a little sum to sustain their families. Photo: Parth Sanyal 04-04-2004