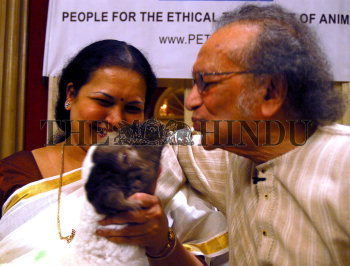 Caption : Pandit Ravi Shankar with his wife Sukanya, holding a two year old sheep rescued from a slaughter house in Mumbai. Pt. Ravi Shankar announced his support for the 'People for the Ethical Treatment of Animals' India's initative to file a case in the Supreme Court versus the Union of India, all State governments and the Animal Welfare Board of India, for failure to alleviate the sufferings of animals in the nation's leather and meat industries. Photo: Paul Noronha