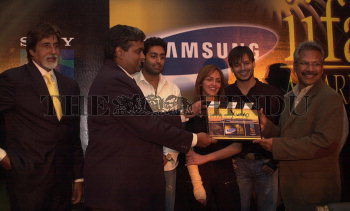 Caption : Amitabh Bachchan with the star of the Hindi film, 'Yuva', Abhishek Bachchan, Esha Deol, VIVEK OBEROI and director Mani Ratnam, at the announcement of IIFA awards in New Delhi, on March 31, 2004. The film is being premiered during the award function to be held in Singapore. Photo: R. V. Moorthy