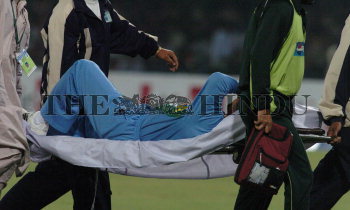 Caption : Indian captain Sourav Ganguly, is taken off the ground on a stretcher after he had injured himself, in the final one day international cricket match between India and Pakistan at the Gaddafi stadium in Lahore, on March 24, 2004. Photo: S. Subramanium