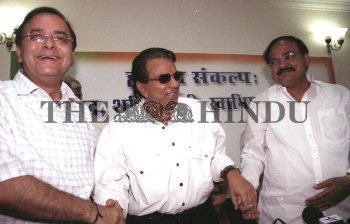 Caption : Actor Dharmendra with the Union Law Minister, Arun Jaitley, and the Bharatiya Janata Party (BJP) president, Venkaiah Naidu, at a press meet after joining the party at the latter's residence in New Delhi, on March 24, 2004. Photo: Rajeev Bhatt