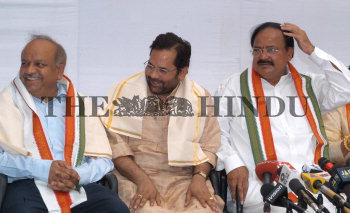 Caption : The BJP president, M. Venkaiah Naidu, with the general secretary, Mukhtar Abbas Naqvi (centre) and Delhi unit president, Harsh Vardhan, during the celebrations on the eve of 'Ugadi' at the former's residence in New Delhi, on March 20, 2004. Photo: V. Sudershan