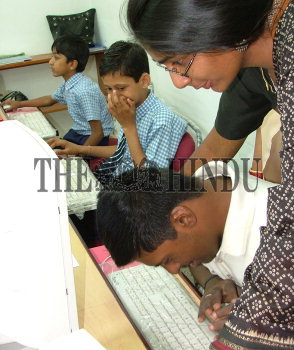 Caption : Intellectually challenged children working at the newly inaugurated Intel Computer Lab at 'Vishwas', a special school for intellectually challenged children, under the aegis of the local Airforce's 'wives welfare association', at the headquarters training command unit of the Indian Air Force, in Bangalore on March 18, 2004. The Special Olympic Bharat will co-ordinate the training. Photo: K. Murali Kumar