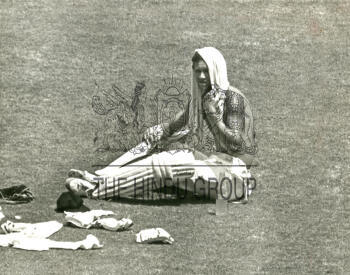 Caption : Dean Jones, Australian batsman, heat wave, cramps and dehyderation not withstanding the Australian batsman and his committed teamwork helped him to score a 210 runs (double century) in the first innings during the first cricket test match and tied test between India and Australia at M.A. Chidambaram Stadium, Chepauk, Madras on September 19, 1986. Greg Matthews took 10 wickets for 249 runs during the match. Kapil Dev scored 119 runs in the first innings. Match tied. (Reference Published in The Hindu on September 20, 1986 and Published in The Sportstar on June 10, 2000) PHOTO: THE HINDU ARCHIVES