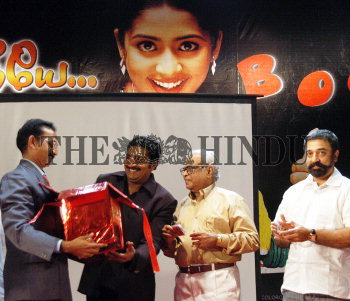 Caption : Film director K. Balachandar (third from left) released the audio cassette of the new film 'Azhaghiya Theeyae' at a function held in Chennai on March 17, 2004. The others in the picture are: Radha Mohan (left), actors Prakash Raj and Kamal Hassan. Photo: V. Ganesan