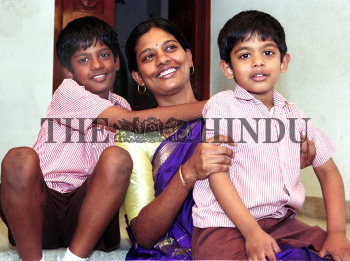 Caption : Niranjan Srinivasan with his mother Malathi Srinivasan and brother, Navin, at Swabodhini, a school for special children, in Thiruvanmiyur, Chennai, on March 15, 2994. Niranjan has Attention Deficit Hyperactivity Disorder (ADHT) and mild autism. The boy, who studies standard IV in the Gujarati Vidyalaya, along with children who do not have ADHT or autism, is ranked second in his last examination. Photo: N. Sridharan