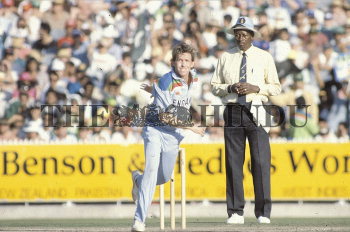 Caption : England bowler DERMOT REEVE completes his bowling action, as umpire Steve Bucknor looks on, in the final against Pakistan at Melbourne during the Cricket World Cup 1992 held in Australia on March 25, 1992. Photo: N. Sridharan