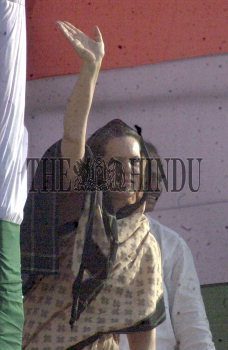 Caption : The AICC President Sonia Gandhi waving to the crowd at a massive party rally at Nandyal in Andhra Pradesh, on March 10, 2004. Ms Gandhi embarked on a three day roadshow to the State to begin the election campaign for the upcoming four-phased general elections, starting on April 20, 2004. Photo: P. V. Sivakumar