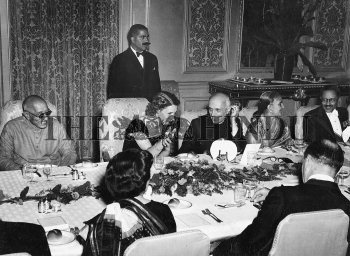 Caption : A farewell banquet was given to Mr. C. Rajagopalachari by the Heads of Diplomatic Missions in India, at the Nizam Palace, Delhi, on January 23. He is flanked by Madame Lamping, wife of the Netherlands Ambassador, Pandit Jawaharlal Nehru, Mrs. K.P.S. Menon and Commanding General Shingha Shumshere Jung Bahadur Rana, Nepalese Ambassador, at the banquet.