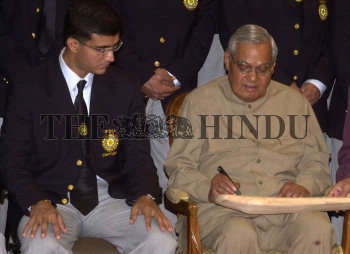 Caption : Prime Minister, Atal Behari Vajpayee, writing a message on a bat, 'Khel Nahi, Dil Bhi Jeetiye, Subhkamnaya', which he presented to the Indian captain, Sourav Ganguly, and the team members, before they set out on the Pakistan tour, at his residence in New Delhi, on March 10, 2004. Photo: Shanker Chakravarty.