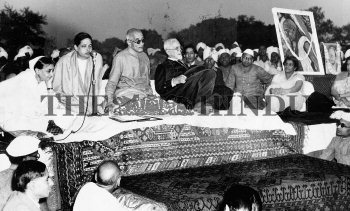 Caption : C. Rajagopalachari, speaking at the 5th Death Anniversary of Kasturba Gandhi at Gram Seva Centre at Lado Sarai, near New Delhi on February 22, 1949. Devadas Gandhi is translating his speech. Dr. Foss Westcott is also seen in the picture.