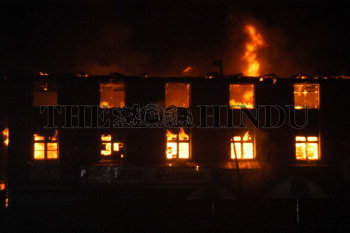 Caption : The building housing the Press Information Bureau (PIB) and the Jammu and Kashmir Information Department in the Press Enclave on Residency Road in Srinagar, was GUTTED during an encounter between two suicide attackers and the security forces on March 9, 2004. The two militants who forced their entry into the building, were shot dead by security forces in a late-night operation. The militants who set the building on fire, tried to escape after a fierce gunbattle but were fired upon and the grenades tied to the body of one of the militants exploded. Two Special Service Bureau (SSB) jawans were also injured in the encounter. Photo: Nissar Ahmad