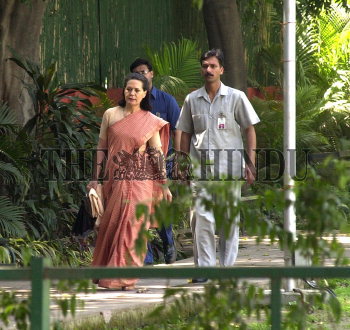 Caption : Congress President, Sonia Gandhi, arriving, to preside over the Congress Working Committee Meeting (CWC), at the AICCI headquarters in New Delhi, on March 09, 2004. The CWC met to finalise the party's manifesto and evolve strategies for the upcoming Lok Sabha and State Assembly elections, which are due to commence from 20 April. Photo: Shanker Chakravarty