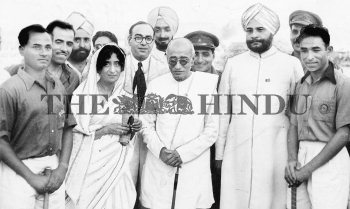 Caption : India's World Cup winning hockey team met Delhi Provincial Hockey X I , at an exhibiton hockey match held at the Irwin Stadium, which was packed to capacity. Shri. C. Rajagopalachari, the Governor General along with Sardar Baldev Singh and Rajkumari Amrit Kaur, witnessed the match. The World Champions beat the Delhi Provincial Hockey X I by one goal to nil. Also seen are Dhyan Chand, who captained Delhi Provl. Hockey and Kishan Lal, who captained the World Champions.