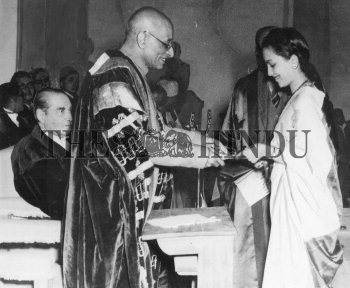 Caption : The Governor General of India, Mr. C. Rajagopalachari, presided over the annual convocation of Delhi University on January 15, 1949. Several Ministers of the cabinet were present. The function was held in the new Convocation Hall in the Arts Faculty Building which had a seating capacity of over 700. Photo shows Miss Manju Sheri of Inderprasth Girls College, the best candidate amongst the girls students, who stood first in Honours, getting the prize from the Governor General.